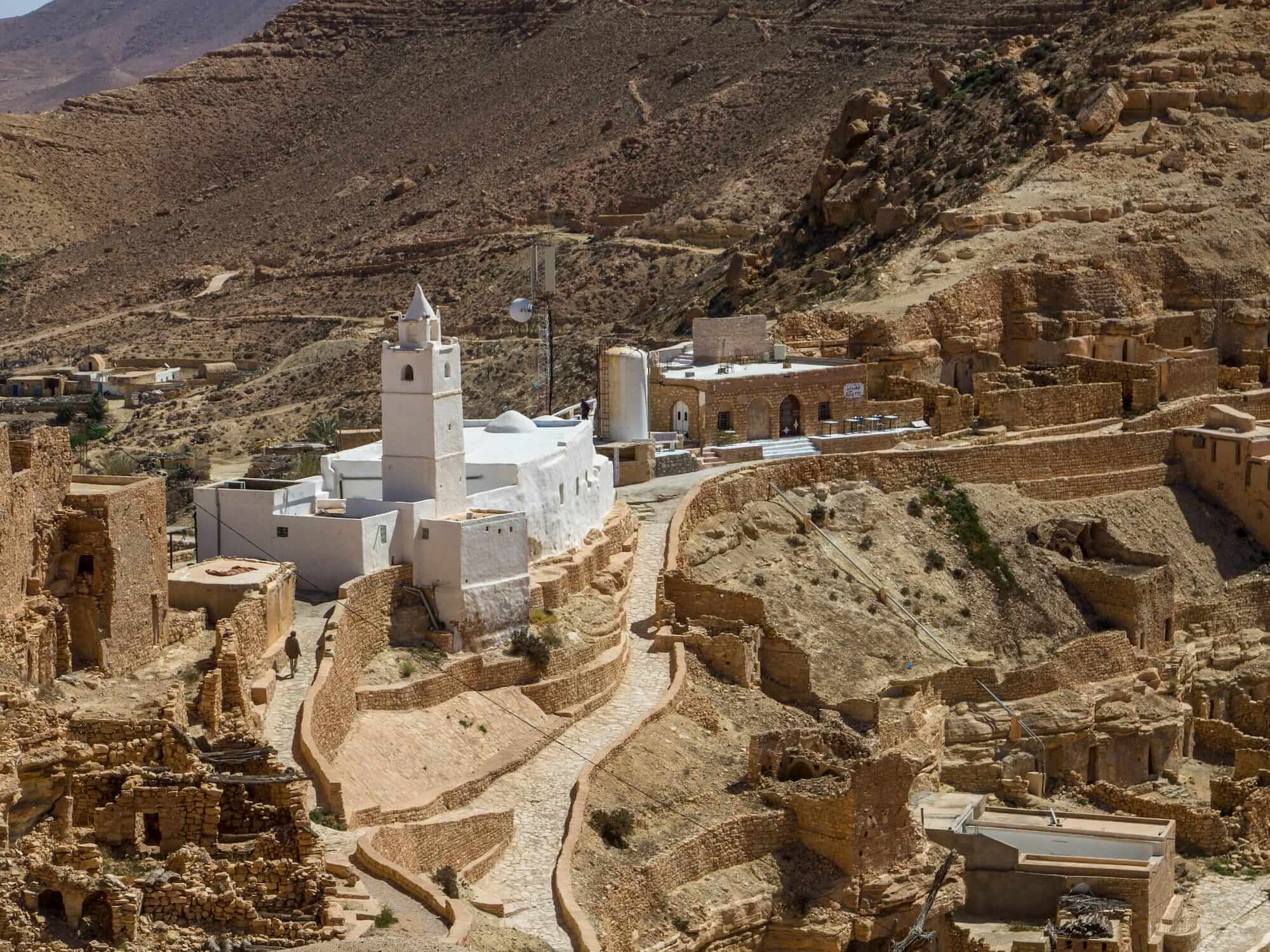 What to see in Tunisia away from the beach resorts

When my wife and I told our family and friends that we were heading to Tunisia for a few weeks of exploration, we were met with puzzled remarks such as “but you aren’t beach people?” And “why are you going for that long, what will you find to do?”. The fact that we returned with six new UNESCO World Heritage sites under our belts and around 1,000 photographs should go some way to answers such questions.

It’s true, Tunisia does have some lovely beaches – we’ve seen them and can verify this. But North Africa’s smallest country is also rich in history and natural wonders and we easily filled our time there without once sitting on a beach. What’s more, I can truly say that Tunisia is one of the most underrated countries we have visited in a long while.

We began our explorations in the country’s capital, Tunis. Manageable and very friendly, it was a good place to start. The medina, one of eight UNESCO World Heritage sites in Tunisia, was far less touristy and more workaday than other medinas we have visited (Marrakech for example) and our private guide knew the maze-like streets like the back of his hand. He was able to show us spots we would never have found on our own, including a fantastic local restaurant, hidden well away from the souvenir stalls, where he took us for lunch.

Another highlight of the capital was the incredible Bardo National Museum. We spent much longer looking around the place than planned but, with so many amazing artefacts and second only on the African continent to the Egyptian Museum in Cairo in relation to the richness of its collection, there was little wonder that we became totally engrossed and lost all track of time.

According to our local guide, there are the remains of well over one hundred Roman settlements in Tunisia. We didn’t have the time, or the inclination, to visit all of them, but the handful that we did see blew us away. The first one we visited was Carthage, a Phoenician city by origin that was greatly developed by the Romans when they seized it from them around 146 BC. What remains of Carthage is spread out over a rather large area but what really surprised us was the fact that much of it is now surrounded by modern-day development.

This was not the case, however, with, what is without question, Tunisia’s premier ancient ruin, the mighty city of Dougga. In our opinion, on a par with Leptis Magna in neighbouring Libya and Volubilis in Morocco, Dougga has a remote, hilltop location and is surrounded by verdant countryside. Like the Bardo, we spent longer than anticipated wandering around and we were fortunate in so much that, for most of the time we were there, we had the site to ourselves, a theme, in fact, that was replicated at most of the places we visited thereafter.

In the north of the country, we took the opportunity to visit the small, but pleasant, Mediterranean town of Bizerte before beginning our journey south. Our goal was the diverse island of Djerba, but we took our time getting there and stopped at a few places en route. This included the whitewashed coastal town of Mahdia and our third Roman site in so many days, the imposing amphitheatre at El Djem, which was for us, arguably, as, if not more, impressive than the Coliseum in Rome. One thing for certain is that El Djem is more accessible than the Coliseum as hardly any of it is roped off and, and there were definitely far fewer visitors.

While on the coast, we also decided to make a quick stop in Monastir to view the magnificent mausoleum dedicated to Habib Bourguiba, one of Tunisia’s most revered heads of state, who was born in Monastir and was instrumental in the country obtaining its independence from France in the first half of the 1950s.

Eventually arriving on Djerba, we set up base in the island’s main town, Houmt Souk, and explored from there. Heading out to the coast, we soon got our first glimpse of the long sandy beach that attracts the lion’s share of visitors to Tunisia. There’s no denying that it is a splendid stretch of coastline but Djerba, the largest island in North Africa, also has a rich and cultural heritage and there are several places of interest scattered across its terrain. For starters, Houmt Souk itself is a low-key and relaxed place with a small medina, some interesting architecture and lots of shady, outdoor cafes that are ideal places in which to sit with a mint tea and watch the world go by. We were also taken by nearby Erriadh, an attractive village that is renowned for its synagogue, as well as its colourful frescoes and street art in an area that is known collectively as Djerbahood.

We were reluctant to leave Djerba but equally, we were excited at the prospect of heading inland, and even further south, towards the fringes of the Sahara Desert.

Our first stop in the deep south was the bustling town of Tataouine. Somewhere to sleep only, all the highlights were away from the town but, what highlights they were!

If we had to pick just one excursion in Tunisia and call it our most memorable then it would have to be our day trip out of Tataouine. Leaving in the morning, our objective was to visit some of the now-abandoned Berber castles, known as Ksar or ksour (plural) that dot the surrounding landscape. Spending time in Chenini, Guermessa and Douiret, the setting for each one is beyond spectacular and we ended the day by visiting the fortified granary of Ouled Soltane, the best-preserved of its kind in southern Tunisian and one of several film locations in the vicinity used by George Lucas for his franchise of Star Wars movies.

We continued our odyssey in southern Tunisia by roughly following the trail of other Star Wars film locations. Not because we are especially massive fans of the movies but because the settings which were chosen are all incredibly scenic and among southern Tunisia’s must-see sights. We saw the sunken troglodytic houses in Matmata, which were used in the original 1977 Star War movie, before crossing the desolate expanse of the Chott el Djerid salt pans to reach the oasis town of Tozeur.

A likeable place with some comfortable traditional Dar-style hotels in which to lay your head, Tozeur has several attractions of its own, including a vast palmerie a short distance from the town’s centre, and an absorbing old quarter known as Ouled el Hadef. But, yet again, it is the surrounding landscape that holds all the trump cards. You don’t have to travel that far out of Tozeur to see picturesque villages, deep gorges and classic desert mirages as well as more than your fair share of truly remarkable desert terrain. We visited all these places using a 4WD and our knowledgeable driver would take the vehicle off-road every now and then to take us up and over the sand dunes and this, of course, added to the experience!

We could have flown back to Tunis from Tozeur, but we decided to go overland and see a little bit more of this contrasting country that, by this point, we had both really warmed to.

En route, we stayed in Kairouan, a mid-sized city in the centre of Tunisia, that reminded us of a few other cities we have visited on our travels. For starters, many of the walls in the medina were painted the same baby-blue that you see everywhere in the Moroccan town of Chefchaouen. What’s more, after Mecca and Medina, both in Saudi Arabia, and Jerusalem, Kairouan is considered the fourth holiest city in the Islamic world and the high percentage of mosques and mausoleums that we visited in Kairouan inevitably made us draw similarities.

In conclusion, we hadn’t really known what to expect when we arrived in Tunisia a few weeks earlier but, as we were leaving we both wholeheartedly agreed that this was an underrated country that had more than delivered a memorable holiday experience. With ancient ruins, epic desertscape, whitewashed towns and impossible-to-navigate medinas (which were all part of the fun!) as well as flavoursome (and sometimes fiery) cuisine and very hospitable people, we both agreed that there’s definitely more to Tunisia than simply beaches …

We have a broad selection of suggested itineraries for Tunisia depending on your specific interests – culture, history, scenery – and how much time you have available. Our new Northern Tunisia Discovery is an immersive tailor-made holiday showcasing the region’s cultural highlights. Prices for the 12-day private tour start at just £2995 per person.

Travellers who want to experience the best hotels in Tunisia should consider our Luxury Tunisia Holiday which includes a stay at the newly opened luxurious Anantara Tozeur Resort which is a stunning property and a is welcome addition to Tunisia’s desert oasis.

For an in-depth tour including all of Tunisia’s stunning Roman and Arab sites, ancient cities and medinas, and an unrivalled cultural insight into the country, look no further than our two-week Grand Tour Of Tunisia.

Browse all of our suggested Tunisia itineraries here or contact our destination experts to discuss the options and start planning your cultural holiday to Tunisia.

Additional photographs of Tunisia courtesy of Kathmandu & Beyond.