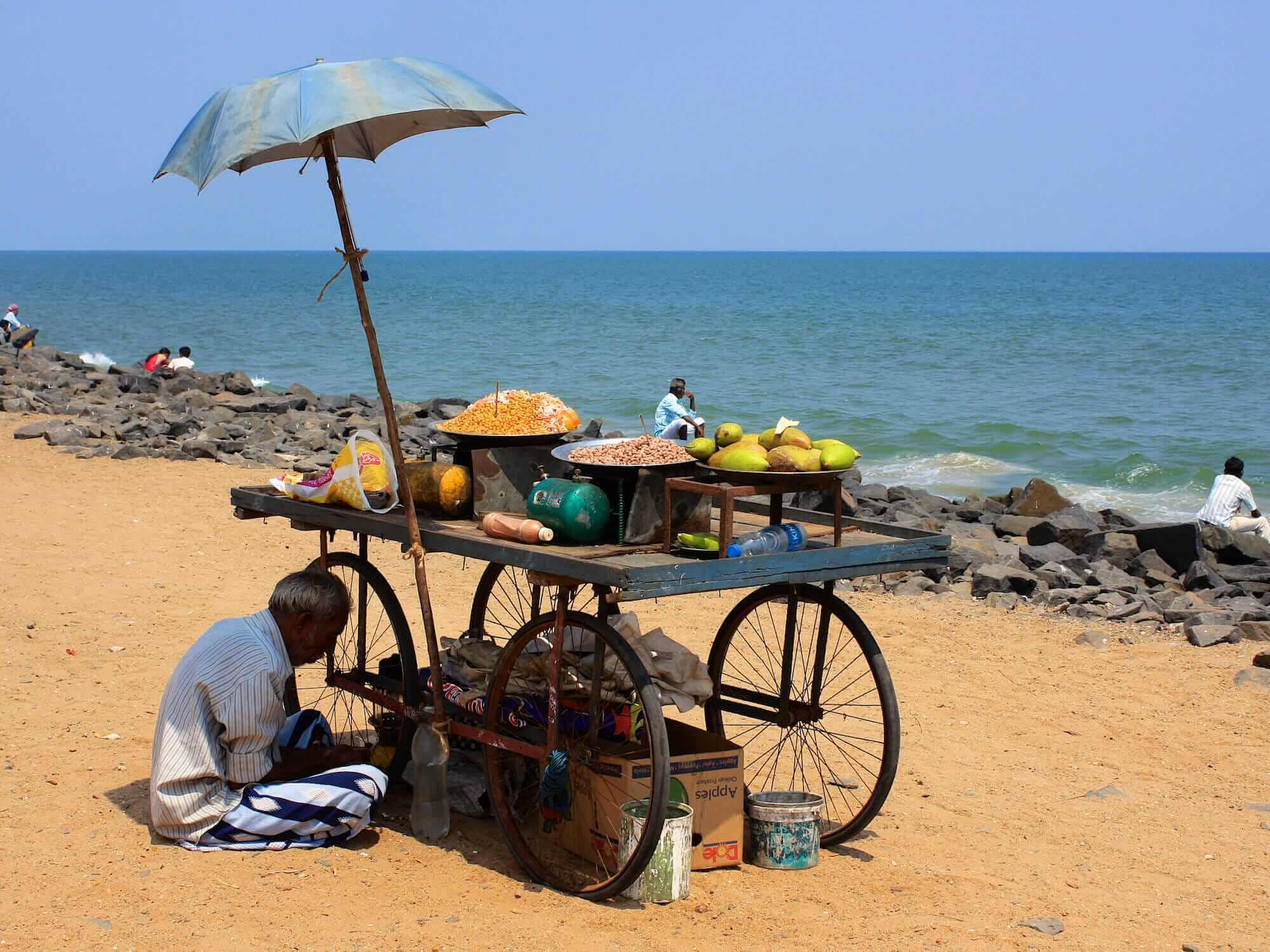 As soon as we arrived in Pondicherry the atmosphere felt very different to almost everywhere else we had visited in India. Officially called Puducherry, but more affectionately known as ‘Pondy’ it was as though the town had as many facets to its character as it did name variations.

The French part of town felt sedate with wide tree-shaded boulevards, colonial style white-washed buildings adorned with bright bougainvillea and a broad seafront promenade. There was hardly any traffic and we would occasionally see beret-wearing gentlemen cycling around the quiet streets.

In contrast, across the canal, the Tamil Quarter is vibrant – bustling with activity and the colour and chaos so often associated with India very much in evidence.

Although Pondicherry’s history can be traced back to the 2nd century and has a past chequered with colonial influence from the British, French, Danes, Portuguese and Dutch, it is the French legacy that is the strongest, and the state was under French rule until 1954. Navigating Pondy is easy – the town is divided from north to south by a canal with the ‘French’ part of town on the east side and the Tamil part to the west.

We stayed at the Maison Perumal, a beautifully restored building in Pondicherry’s Tamil Old Quarter. Part of the prestigious CGH Earth group, both Maison Perumal and its sister hotel, the Palais de Mahe, are equally well-appointed for exploring the town.

Our favourite way to explore a destination is on foot and a heritage walk through Pondicherry’s past and present allowed us to unravel the true essence of Pondy. We began on the Tamil side of town with a visit to the vibrant fish market where vendors vied for attention by shouting loudly to advertise their catch of the day. Stopping off at a couple of ornate, distinctly Tamil-style temples we also explored the unique style of architecture found here in which houses are built wall to wall with a covered verandah extending across rooftops and inner courtyards and almost to the street. This gives the buildings a very uniform look.

From here we strolled across the canal to the French part of Pondicherry and explored the streets, visiting art galleries, antique shops and quaint cafés. One of the most fascinating things about Pondicherry is the diverse mix of coexisting cultures, and in addition to those already mentioned, Pondy also has Muslim, Christian and Hindu quarters as well as an ‘ashram town’.

Possibly the world’s most famous ashram community, Auroville, lies a short distance from Pondicherry and makes for an interesting day trip from the town although guests are encouraged to stay a little longer. Founded in the 1960s as an experimental township and today a centre for learning and meditation, the focal point of Auroville is the Matrimandir, an unmistakable landmark with the appearance of a giant golden golf ball. It can be admired from a viewing point in the peaceful gardens and the Visitors’ Centre gives an insight into life at Auroville.

Returning to Pondicherry, we ended the day with a walk along the seafront promenade. A popular place for locals to take in the air and chat with friends, we bartered for some traditional Tamil snacks from a street vendor before enjoying a glass of French wine from a nearby café as night fell across the Bay of Bengal.

Visit Pondicherry on a tailor-made holiday to India – contact Corinthian Travel for further recommendations. Suggestions include Passage through Coromandel & Malabar, Spiritual Tamil Nadu and the Grand Tour of South India.

Post by Kirsty Bennetts. Full-time traveller and co-owner of the travel blog, Kathmandu & Beyond, Kirsty and her husband Mark spend much of their time exploring the Indian sub-continent.