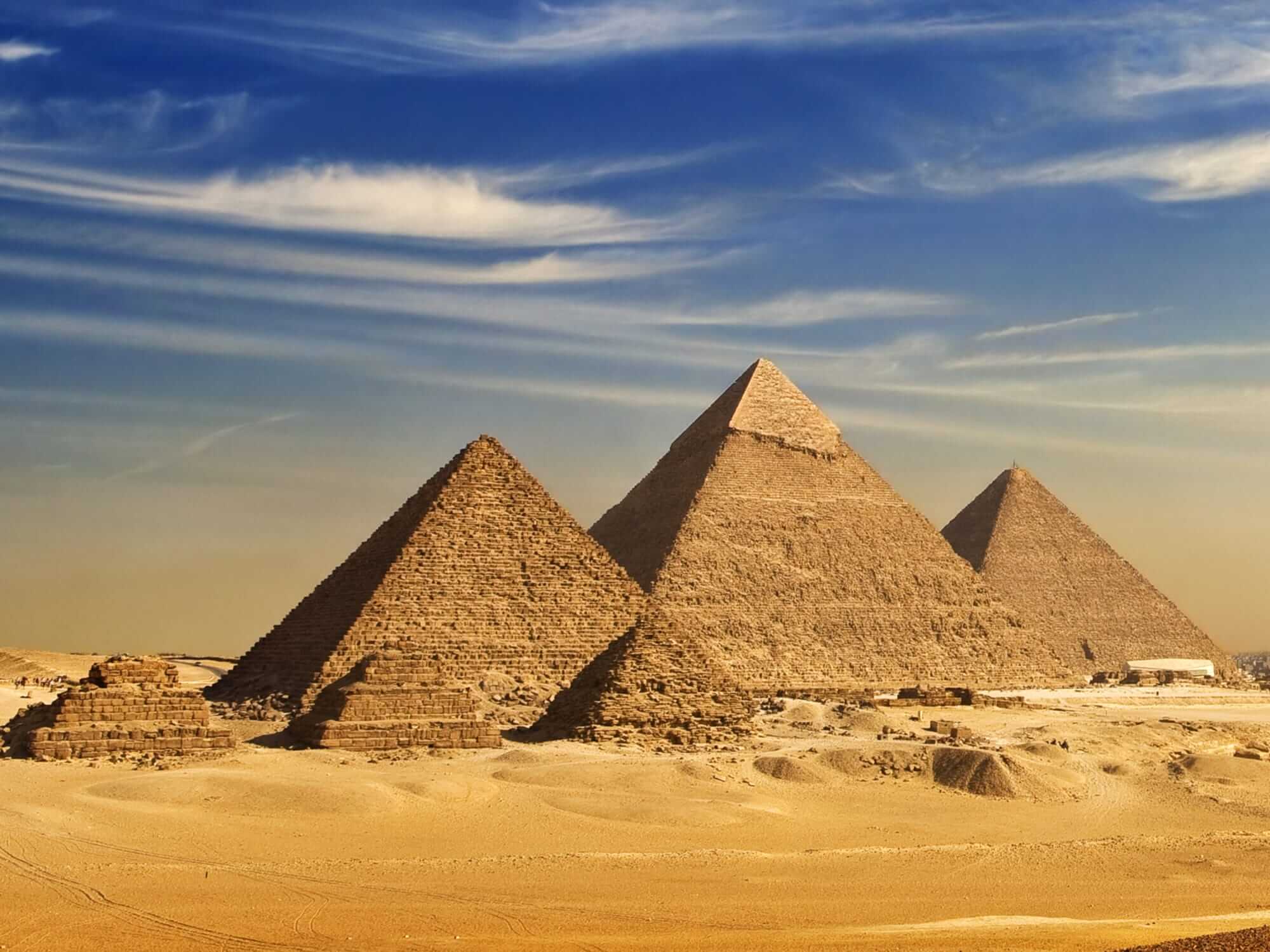 The Pyramids of Egypt are amongst the top visited tourist attractions in the world, with a whopping 3 million visitors every single year. Perhaps for some, the popularity of the Pyramids strips away some of the fairy-tale. And perhaps for some, the endless documentaries and fictional films are enough to quench any curiosity. But no matter how the rest of planet views this World Wonder, nothing ever changes the feeling. That feeling you get when the Pyramids of Giza are right in front your eyes and you’re about to embark on a special adventure into Egypt’s secretive past. For us and many of our clients, the magic of the Pyramids will never subside. Because if you take away all the glamour, all the media attention, all the tourism, these magnificent structures are still mind-bogglingly magnificent in every single way. To this day, we’re still not entirely sure how these mystifying monuments were erected so perfectly. And as one of the original and first wonders of the world, these pyramids are not only a symbol of Egypt but they’re also a symbol of world civilisation and the incredible capacity of the human race.

If you’re visiting the Pyramids for the first time, it’s important to be prepared. And as many visitors will tell you; it’s better to have too much time to explore than too little and feel rushed during your first Egyptian Pyramids experience. So read on for our comprehensive guide and travel tips for your upcoming visit to Giza. 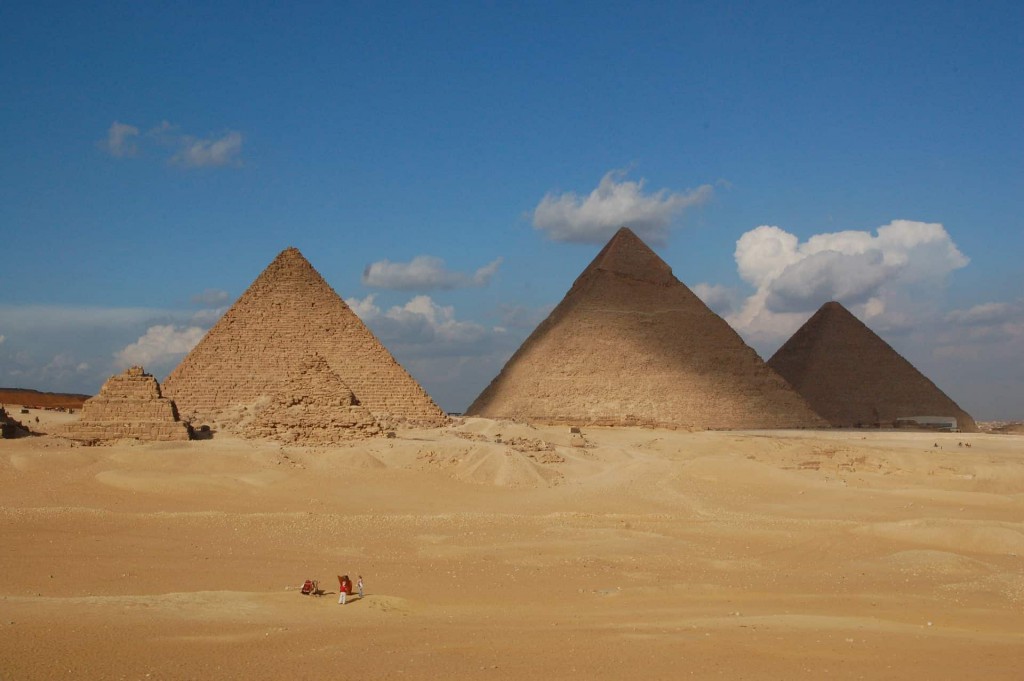 Where are the Pyramids?

The Pyramids are located in Giza, the third largest city in Egypt. Set on the west bank of the River Nile, you’ll be just over 10 miles away from Cairo. So you’ll be conveniently located if you are staying in a hotel in the city of Cairo and you’re looking for a day trip tour that is easily accessible. Cairo and Giza are in the Northern region of Egypt, just a few hours away from Port Said and Alexandria so you will be ideally placed for international travel to the Greek Islands if you want to combine your destinations.

As of 2008, sources cite that there are up to 138 pyramid structures in the whole of Egypt, but the most famous pyramid structures are still the Pyramids of Giza, with the most well-known and popular of this group being the Great Pyramid. Of the Seven Wonders of the World, these monuments are the oldest and they date back all the way to 2560 BC, under the second ruler of the Fourth Dynasty, Pharaoh Khufu in the very beginnings. One theory suggests that thousands and thousands of people were enslaved by Pharaoh Khufu in order to complete the construction of the Great Pyramid. Although years later, there was evidence to show that some or even all of these workers were actually local Egyptians who lived in the villages nearby, working under Khufu’s supervision. So the true mystery of who and how still kind of remains.

Pharaoh Khafre, the successor and son of Khufu was there to later oversee the build of Pyramid of Khafre and also the famous Sphinx monument. Pharaoh Menkaure who was the sixth ruler within this dynasty started the construction of his own pyramid but when he passed, his heir Shepseskaf took over construction and it was eventually completed by 2490 BC.

Historians tell us that in total, the Giza Pyramids took around 80 years to build with an estimated number of 30,000 people working on them. But even before construction began, there were many minds and many important people involved in the design and development of the pyramids, which is why they are such incredible, magical monuments today. Astronauts and priests were called in to determine the correct position of the pyramids and then architects came in to guide the shape of the pyramid structures using rope. Copper tools were used to sculpt the rock pieces and it is believed that the huge rocks were hauled up using ramps.

To this day, some of the workers’ names are still seen carved into the stones of the pyramids. Records show that the workers who built these structures not only considered themselves proud servants of the kings of the Fourth Dynasty, but they also had a sense of humour during their working days too; with some carvings translating as “Friends of Khufu” and “Drunkards of Menkaure”.

These pyramids are now housing places for tombs of the pharaohs who commissioned them, which gives us a lot of indication about their connection to the afterlife. Yet we still aren’t entirely sure how they were built, exactly who built them, and for what exact reason. But historians and archaeologists continues with their theories and the mystery certainly adds a sense of romance to the Egyptian Pyramids story. 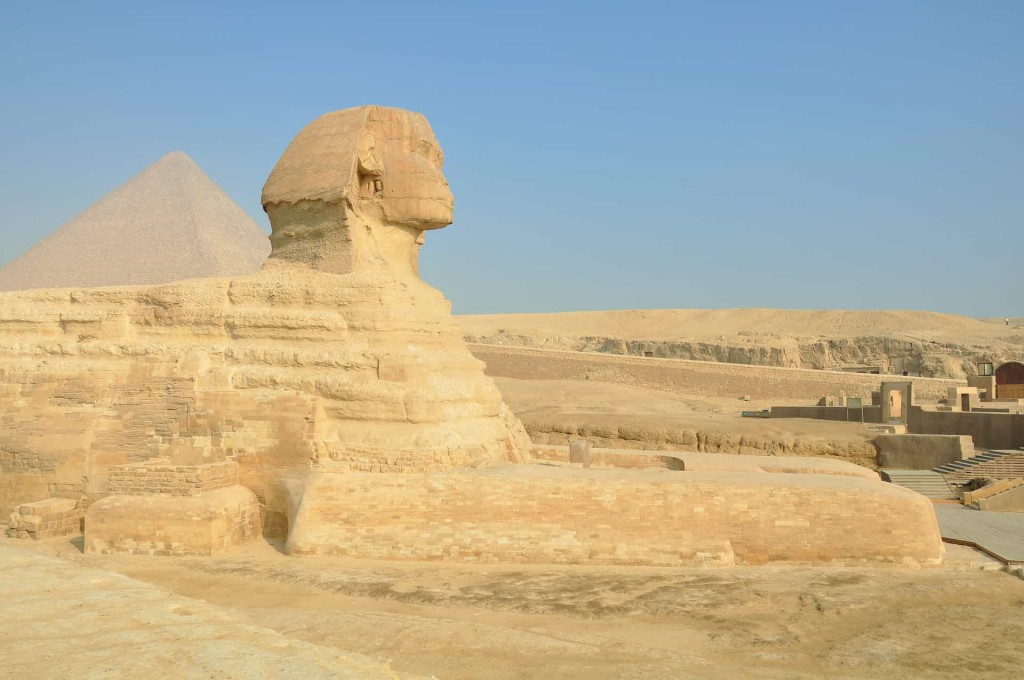 How to Get There

If you are staying in Downtown Cairo or another tourist-safe area of Cairo, there are three easy ways to get to Giza.

How Long to Go For

You can’t really spend too much time at the Pyramids of Giza. After all, this UNESCO site belongs to the original Seven World Wonders. And if you ask many visitors who have been before, they will tell you that your experience is completely different in the day and at night. Plus there are options when you get there such as camel rides – and seeing the pyramids on foot and by camel are also unique in their own ways. So as a general guide, at least a whole day if you have the time. That way, it gives you the flexibility to see the pyramids in sunlight as well as capturing great photo moments at sunset. 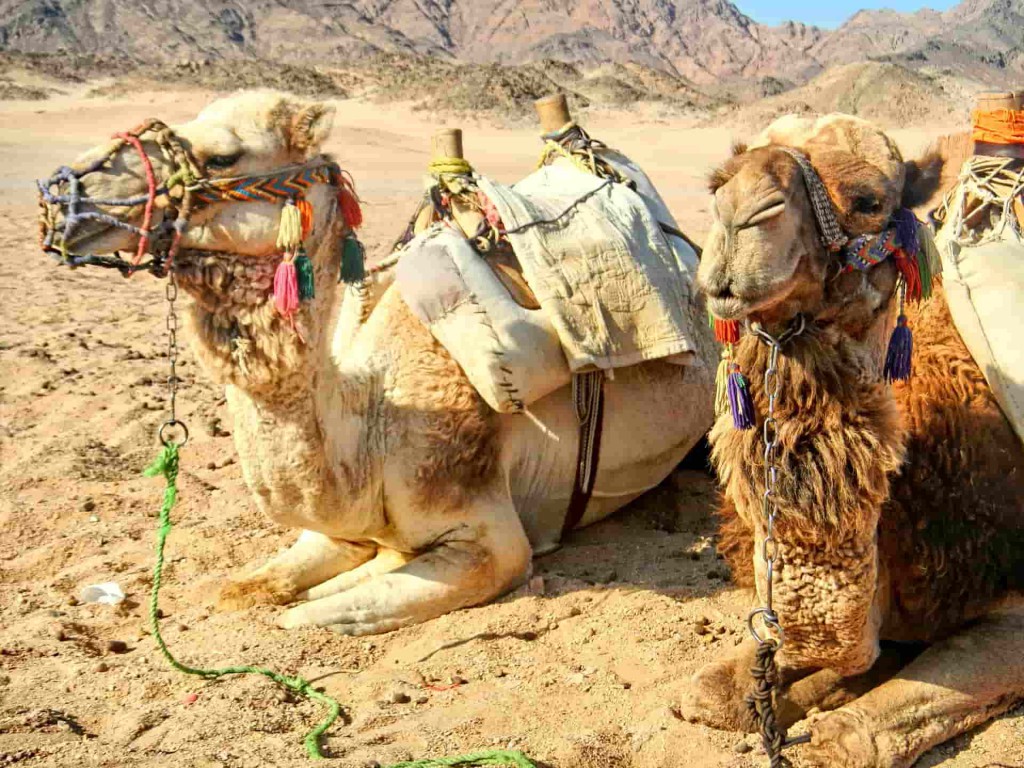 If you’re staying in Cairo or nearby, it may even be a good idea to keep a few days of your itinerary quite loose so you have the flexibility to revisit.

There’s a general admission ticket to get into the complex and once you’re inside, you will have great views of all the key monuments. But to get closer or to enjoy a tour, there are individual ticket prices for each attraction.

Most people like to stay in Downtown Cairo when visiting the Pyramids and this is around 30 minutes away from the complex (although traffic can dramatically increase travel time). Whilst Giza is technically a separate governorate and was once a city of its own, Cairo’s expansion in recent years has joined the two areas together so getting to and from the complex is extremely easy and there are many transport options. Other popular areas that tourists find comfortable and safe are Zamalek, an affluent residential area in Cairo with a number of luxury hotels and boutique hotels.

You can also stay in Giza if you would like to be close to the complex. There are a few decent hotels to choose from in this area and staying here is ideal if you plan to spend a few days checking out the Pyramid site.

Most travellers like to visit during the winter season, typically from late November to February, because the climate is warm yet mild so travelling at this time is much more comfortable. From May to October, the summer can be unbearable for some and many of Egypt’s most affluent will retreat to their summer homes by the coast during this period. Other than the spike in tourism during Easter, the rest of March, April and early May can be great times to visit for slightly smaller crowds and balmy springtime weather. 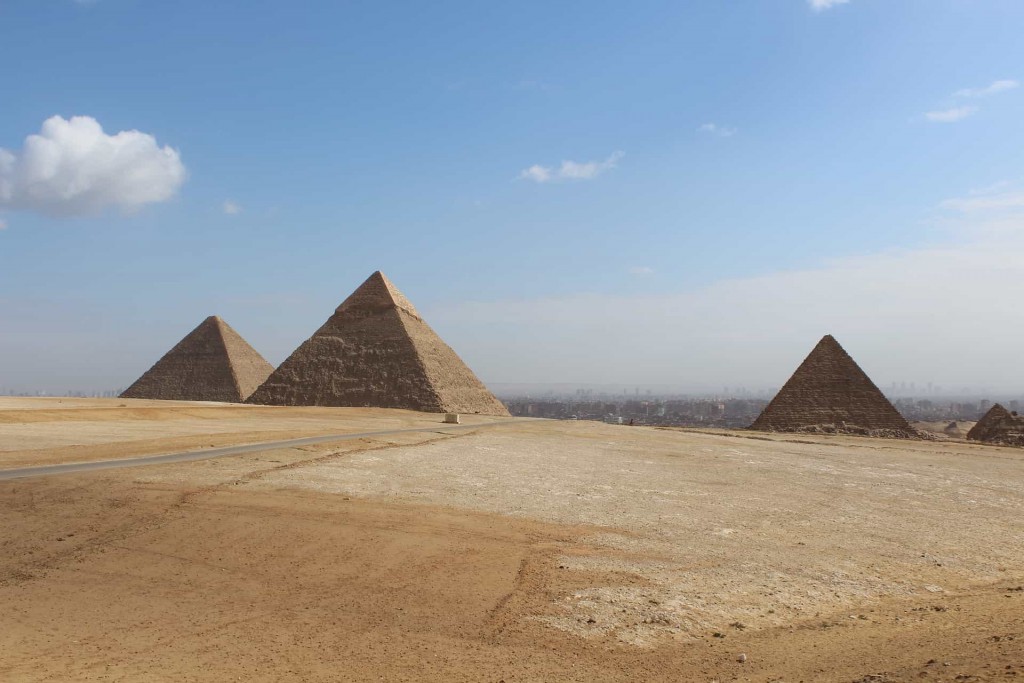 The most important thing to consider is suitable footwear. The site is quite large and you will spend much of your day walking on foot. Egypt is predominantly a Muslim country and the dress code is quite conservative so when it comes to clothing, it’s important to be respectful of this.

For men, it’s not acceptable to wear shorts so trousers and a t-shirt is a standard option, although there are some resorts which are more relaxed about this. For ladies, it’s important to be modest and keep legs covered. Low cut tops, tight clothing or see-through clothing should generally be avoided.

When spending time in the heat in such an open area such as the Giza Pyramid site, other essential items to bring include:

* A hat / cap to shade your face from direct sunlight

* A backpack / rucksack for food and water

The site opens every day between 8am and 5am from October to March, and 7am to 7pm every day between April and September. There is also a Pyramid Sound and Light Show, which is available after opening hours (tickets for this show need to booked in advance and are subject to seasonal availability). General site entrance tickets are 50 LE with additional tickets for the pyramids themselves. Khufu’s Pyramid costs another 100 LE and Khafree’s Pyramid costs 20 LE.

Best Places to Eat and Drink

There are many places near and around the site to grab a bite to eat but some travellers also like to bring a packed lunch to save money. The Mena House Hotel has a lovely restaurant and just outside the Sphinx entrance, there are also a number of cafes and eateries offering great views and low budget menu prices.

When it comes to travelling to Giza, there are number of scams you need to be aware of. When travelling from Cairo to the Pyramid complex, you may have to bargain with your taxi driver. Some will refuse to turn their meters on because they want to bump up the price as much as possible. If you want to avoid this problem, you can also catch a bus or take the Metro to Giza.

Another scam you may come across is taxi drivers and camel owners / horse owners working in conjunction with one another to help boost each other’s business for the day. For instance, a taxi driver may tell you that the only way to the main entrance is by horse and carriage and he will take a cut of the horse owner’s fare. At the entrance, you will also find camel owners and other unofficial guides trying to tell you that it is illegal to tour the Pyramids without a guide (this is of course not true), or you may even come across people telling you that they need your business because they can’t feed their families. You will come across every kind of scam tactic; from trickery to sob stories.

Other top tips for visiting the Pyramids of Giza include:

* Take a luxury tour with a trusted operator to save both time and money, and enjoy the convenience of having all the logistics taken care of.

* Remember the tipping culture in Egypt is often expected. Beware not to let people do too much for you if you have no intention of tipping. Otherwise you could find yourself being shouted at with the words “baksheesh, baksheesh!” (meaning “tip, tip!”) after accepting a hand towel in the bathroom or after accepting help with a particular service.

* Dress appropriately and modestly to be respectful of the culture. Although some enclosed tourist resorts are more relaxed, generally shorts or anything showing your legs (or low cut tops for women) are frowned upon.