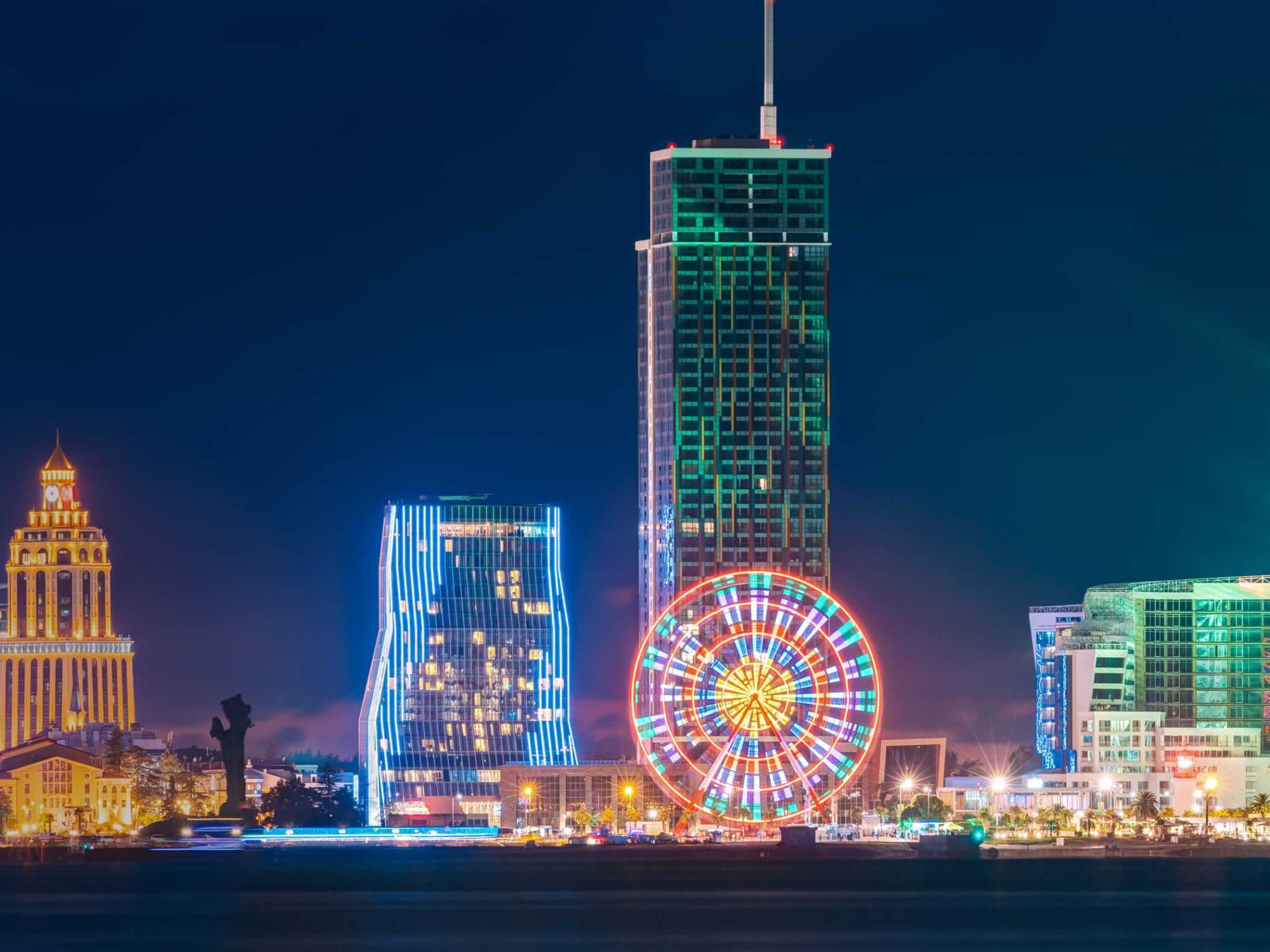 The Georgian coastal city of Batumi is renowned as one of the Black Sea’s premier resort towns. The smooth-pebble beach is long and wide, the sea is clean and good for swimming and there is plenty of entertainment in the evenings to keep night owls busy.

In essence, Batumi is a fun and relaxed place to be but, for the more discerning travellers, the city also offers a plethora of pleasant surprises that, if combined with a few days rest and relaxation in one of the city’s excellent hotels, provide the ideal way to complete a bespoke holiday in the country of Georgia.

Because of its location at the foot of Caucasus, Batumi has a subtropical climate which ensures that neither the winters are too cold nor the summers are too hot. It was this fact that attracted the elite of the Imperial Russian Empire to Batumi in the first instance and its reputation as a summer holiday resort grew from there.

Batumi is also a port-city but because the nearby border with Turkey was closed during the period when Georgia was part of the USSR, the city’s prominence dwindled somewhat and it wasn’t until the dissolution of the Soviet Union and the country’s subsequent re-independence in the early 1990s that Batumi started to flourish again. With assistance from the newly-appointed Georgian administration, who really wanted to put Batumi back on the map once more (both from a commercial and touristic point of view), the city was soon transformed from a relative backwater into one of the country’s most vibrant and attractive places to be.

Batumi is quite unlike any other city in Georgia and although its location is a little out on a limb (more on that later), it is most certainly worth visiting and offers a fascinating contrast to other, more traditional, destinations in the country.

Highlights of Batumi: What to see and do

Batumi’s eclectic mix of architecture is undoubtedly one of its main draws. Take a short walk around the city centre, concentrating on the areas around either the Drama Theatre or Europe Square for example, and you will quickly spot traditional 19th-century Russian houses, ultra-modern high-rise masterpieces and (now) brightly-coloured Soviet-era apartment buildings all next to or within a few blocks of each other.

It’s hard to miss the eye-catching Radisson Blu Hotel or Batumi Tower, which are two examples of the city’s newer constructions, but the photogenic period buildings in the backstreets of the Old Town, some of which are in excellent condition while others remain more ramshackle, are equally as appealing.

And if you are wondering what the strange-looking structure at the top of Batumi Boulevard is? Well, that’s the city’s wedding palace or what we would more commonly call a registry office!

In theory, such a hotchpotch of architectural styles shouldn’t work, but it does and Batumi’s skyline, which is best seen from the beach, is one of the most imaginative in the Caucasus. 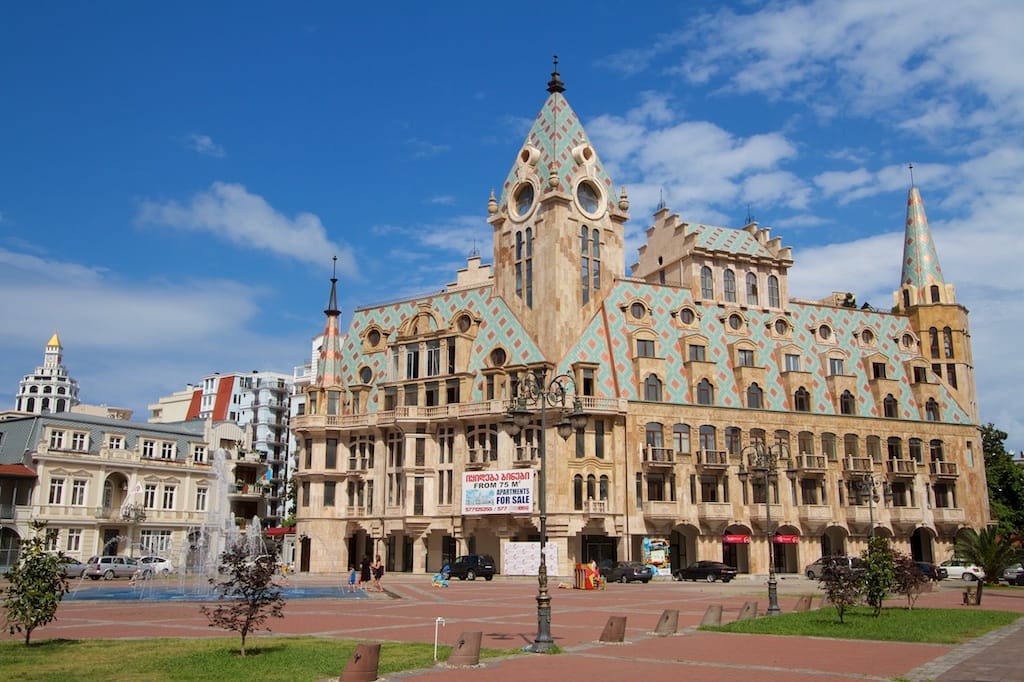 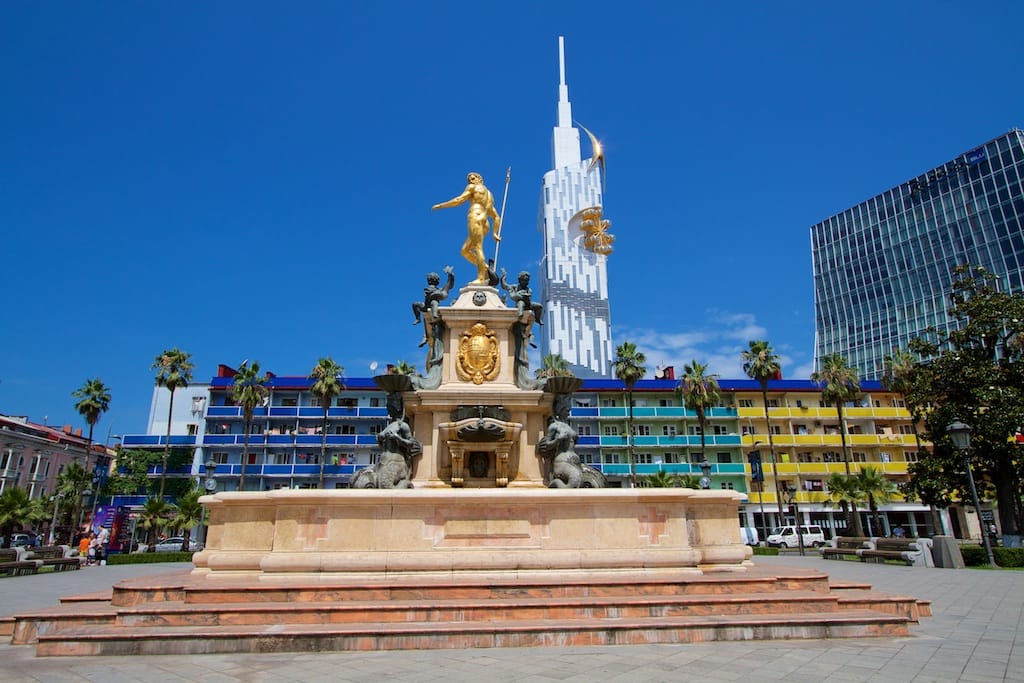 Dating back to 1881, this Russian-era seaside park and promenade remains the beating heart of the city, especially in the summer months when the nights are long and the walkway and adjacent cafes and bars are awash with locals and tourists alike. Originally constructed at the behest of the then-governor of Batumi District, the seaside park has more or less retained its original features but the boulevard has expanded since that time and is now in the region of 7km in length. Lined with fountains, cafes and beach bars, there are also several quirky statues to look out for when strolling along its course. 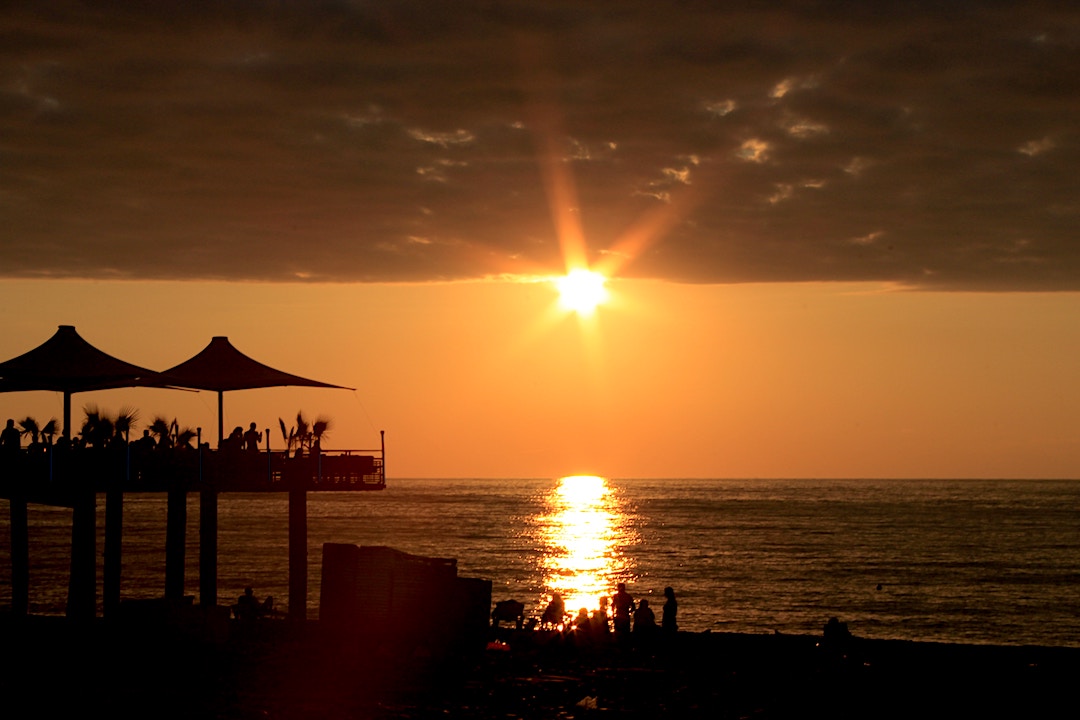 The Turkish border town of Hopa is only 37km southwest of Batumi. What’s more, Batumi was conquered by the Ottomans in the 15th century and, apart from odd periods when it was recaptured, it remained in Turkish hands until the Russo-Turkish War of 1877-78. It’s not surprising, therefore, that Batumi still has an authentic Turkish district, which is not only a captivating place to wander around, but also the go-to area to make a beeline for if you are craving some delicious Turkish cuisine.

Along with the architecture, the other thing that is most noticeable in Batumi is its abundance of unusual sculptures and monuments. Of the numerous pieces of art spread out all over the city, two of the most famous are situated at the northeastern end of Batumi Boulevard. Ali and Nino is a continually rotating, and mesmerising, pair of metal statues that represents the tragic separation of two lovers; Ali a Muslim boy and Nino a Christian Georgian princess. The nearby 130-metre-tall Alphabet Tower, on the other hand, is a far more hectic helter-skelter shaped monument inspired by the thirty-three letters of the Georgian alphabet. Both are worth seeing but also keep an eye out for other, equally innovative, works when discovering the city and, if time permits, try and see some at night as many of them are illuminated. 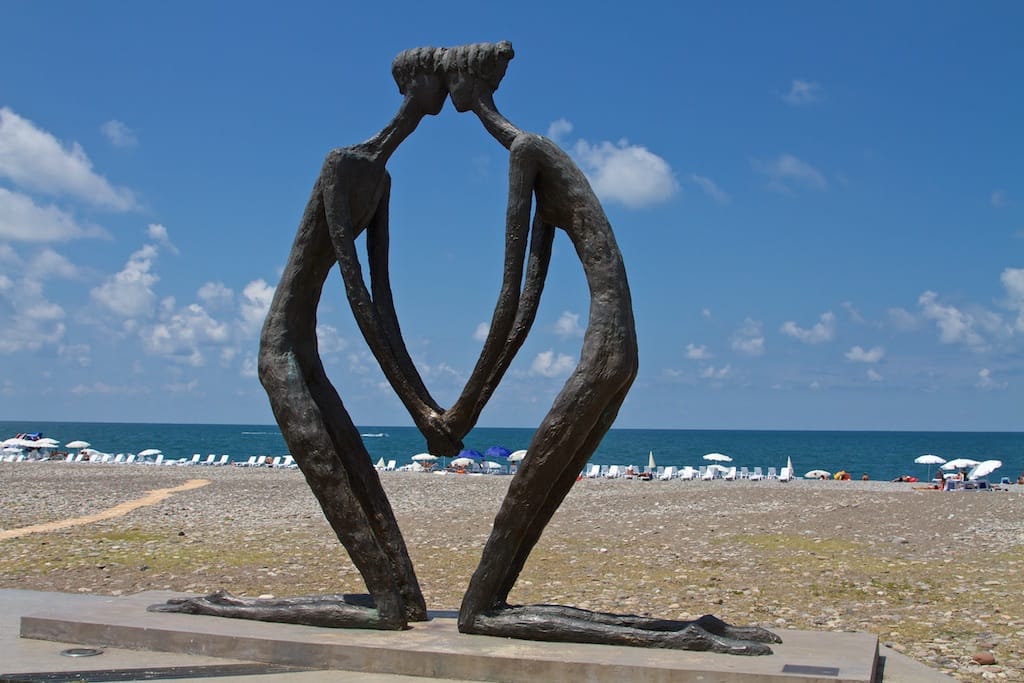 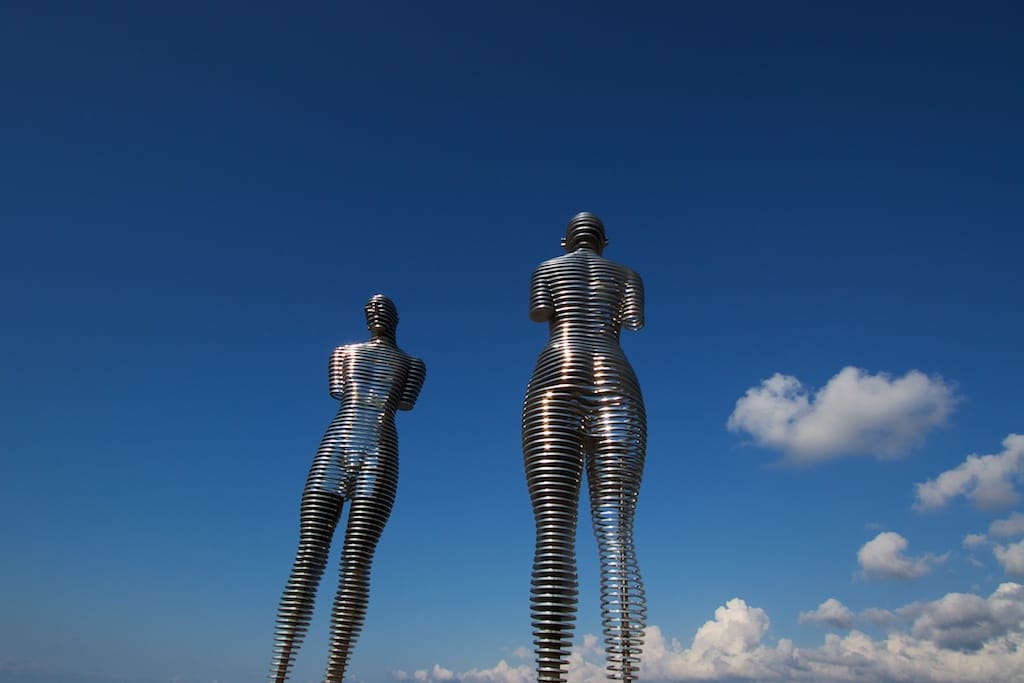 Located on the northern outskirts of the city, Batumi’s botanical gardens are a wonderful place to meander slowly through for a few hours or so. Boasting a wide variety of flora, this green oasis is not only one of the city’s most tranquil spots, because of its hillside location, it is also one of the best places to capture a panoramic view of Georgia’s Black Sea coast shoreline.

One of the most pleasurable things about spending time in Batumi is the opportunity to experience the city’s superb restaurant and cafe scene. After Tbilisi, Batumi has the best dining options in the country and you will find all manner of places both along and near the boulevard/beach and in the streets that lead off it. One of the nicest spots is the Italian-influenced Piazza Square. Yet another of the city’s architectural landmarks, the setting in the piazza is fantastic and there are a number of restaurants and cafes in which to enjoy the outdoor setting.

The Old Town is another great spot to head to for cuisine. From atmospheric and traditional Georgian-style restaurants to hole-in-the-wall bakeries selling freshly baked khachapuri and lobiani (Georgian cheese and bean-filled bread respectively), there are plenty of options in this part of the city to suit all tastes.

And then there’s Clouds Restaurant and Bar on the 19th floor of the Radisson Blu Hotel. Whether you go for just a drink or for a full dining experience, we recommend going at least once in order to capture the breathtaking views across the city. 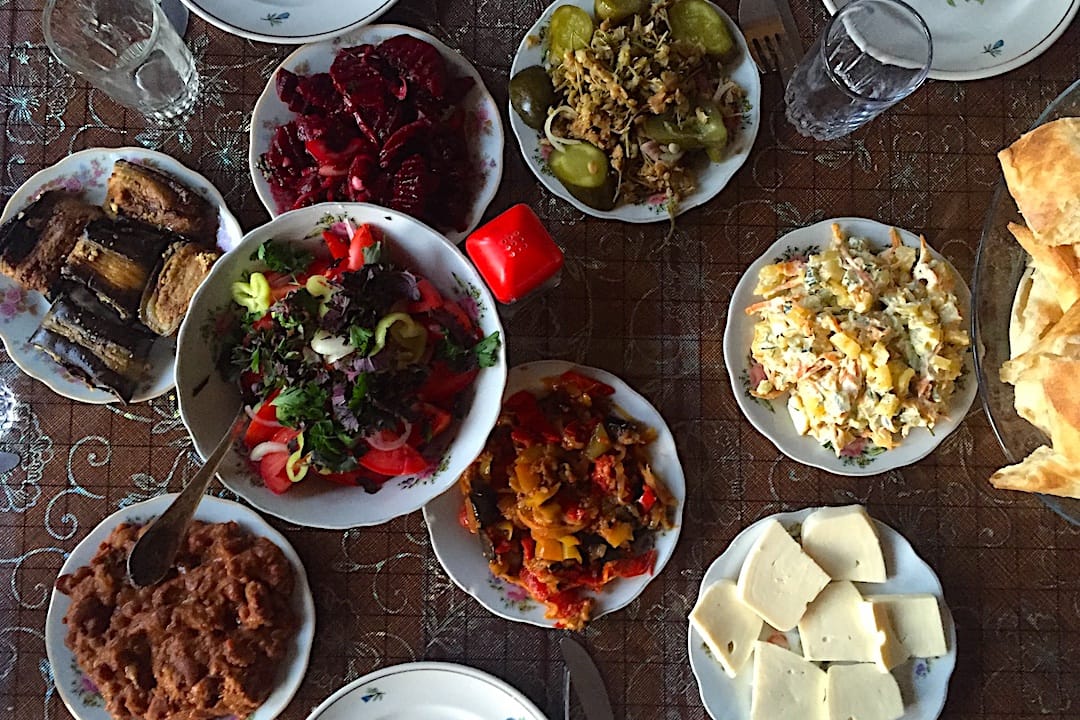 Combing Batumi with the rest of Georgia

Even though Batumi is in the far west of the country, it is not as far away as you might think and easy to combine with other places of interest in the country. Travelling time from Tbilisi by private chauffeur-driven vehicle is around 6 hours but there are places of interest in which to break the journey along the route. This includes Gori, the birthplace of Stalin and home to an unusual museum dedicated to his life, as well as Kutaisi, a pleasant city that is often overlooked on other tour company’s Georgia itineraries but a firm favourite with us and highly recommended for an overnight stop.

What’s more, Batumi is easily combinable with the ancient and mountainous region of Svaneti, one of Georgia’s star attractions, and, for those looking for an off-the-beaten-path experience, there is the option to travel through the Adjara Mountains connecting the city of Batumi with the dramatically-located cave monastery at Vardzia in southern Georgia.

In conclusion, we found Batumi to be a diverse city that went beyond our expectations and we would have no hesitation in recommending the inclusion of a few nights there as part of a personalised and comprehensive Georgia itinerary.

Suggested itineraries to Georgia including Batumi

Travel from Tbilisi to the Black Sea coast and explore the magical mountain region of Svaneti on Georgia & The High Caucasus, a 10-day private tour staying in boutique guesthouses and luxury hotels with prices starting from just £2345 per person.

Alternatively, enjoy an all-encompassing holiday that takes an in-depth look at this immensely diverse Eurasian country on a Grand Tour of Georgia (15 days from £2985 per person).

Additional photographs courtesy of Kathmandu & Beyond.