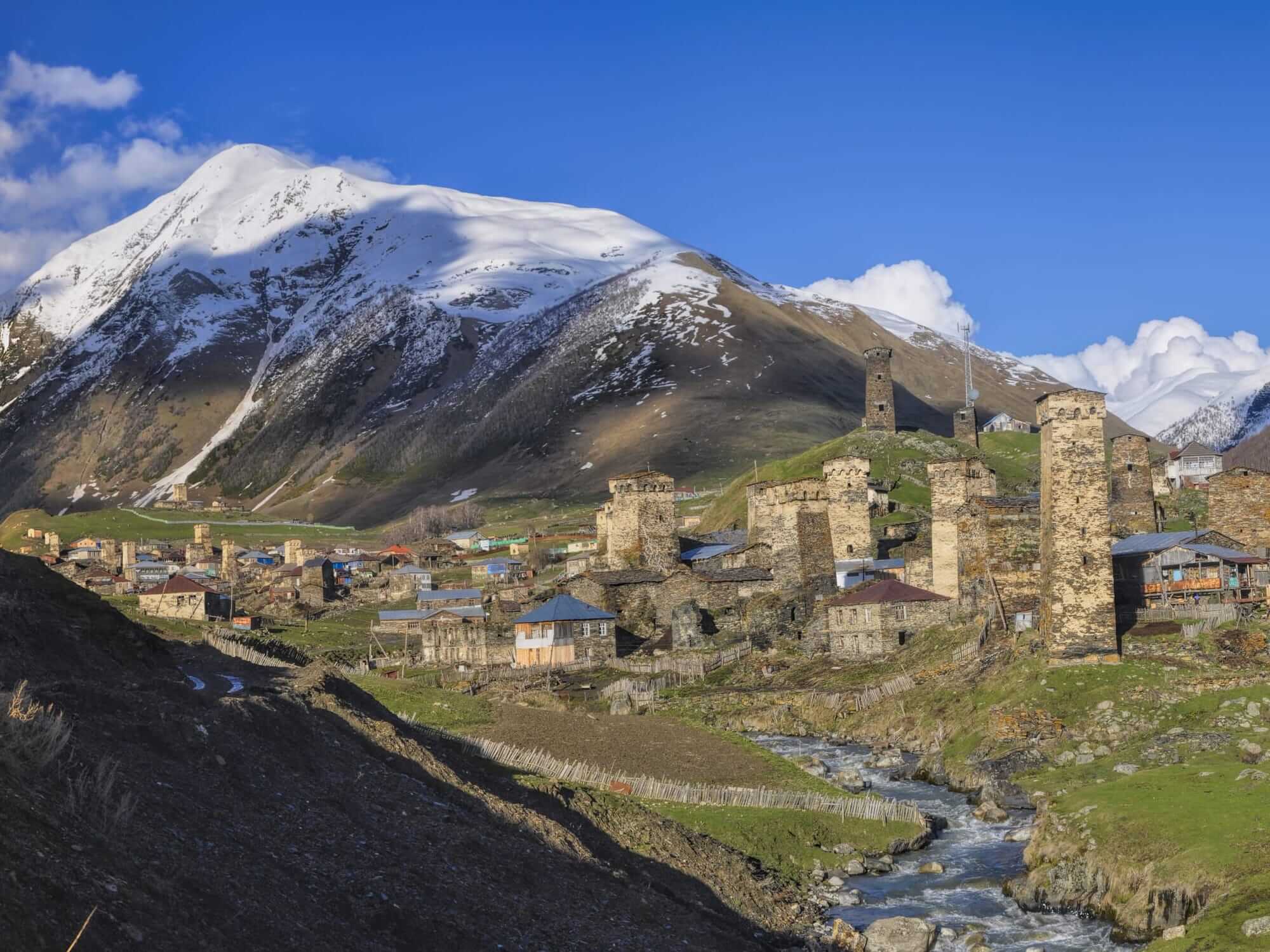 Not dissimilar in a way to the history of Afghanistan, the landlocked Georgian region of Svaneti has seen more than its fair share of invaders. It’s as if everyone and anyone in the world of conquering empires has passed through this ancient territory at some point, including the Persians, Mongols and Turks. And like the Afghans, the people of this land, the Svans, a subgroup of Georgians who, to this day, continue to speak their own unwritten language, have done a good job of repelling many of those that have tried to plunder their territory.

For centuries, these hardy people protected themselves, their livestock and their valuables by residing in well-built, stone towers known locally as koshki. They are very distinctive and, along with the magnificent mountain scenery for which the region is also known, they are one of Svaneti’s most recognisable landmarks.

The towers came into being because, although land was plentiful in this part of northwest Georgia, it was rugged and wild and protecting it with defensive walls was difficult, and so the Svans built these mini-fortresses and lived in them, thus minimising the risk from marauding invaders.

And the towers didn’t just come in handy for protecting the inhabitants against outsiders. Until recently, the Svan people had a reputation for blood-feuds and many longstanding, and often murderous, disputes resulted in families barricading themselves inside their tower for many months at a time.

These days, the Svans are somewhat more restrained when it comes to sorting out inter-village quarrels and, what’s more, most have moved out of the family koshki in favour of more comfortable and practical living quarters. But, many towers still dot the landscape and visiting one or two is all part and parcel of discovering the Svaneti region.

Many can be seen in Mestia, an appealing Alpine-esque settlement and the ideal base for exploring further afield, but, to truly appreciate the scale of the towers, it’s better to travel around 50km southeast along a bone-rattling road to the remote village of Ushguli. Reportedly, Europe’s highest permanently inhabited settlement, Ushguli is locked in by the Caucasus Mountains and sits in the shadow of Georgia’s highest peak, Mt. Shkhara (5201m). The location of the village is beyond picturesque and from a vantage point, a short distance away more than a dozen medieval towers come into view.

It’s easy to see why UNESCO has awarded the towers World Heritage status but, they are merely the icing on top of an extraordinarily ornate cake where Svaneti is concerned. This beautiful and wild land is a paradise for trekkers and lovers of mountain scenery alike. There are hikes for all levels immediately out of both Mestia and Ushguli and fine views of the snow-covered peaks of the Caucasus Mountains are never far away. Add in the historical significance of the region and the deep-rooted traditions of the ethnic population and it’s easy to see why some visitors spend weeks in this remote and unique part of Georgia.

Has this story and these stunning photographs inspired you to travel to Svaneti to see the stone towers for yourself?

Enjoy a three-night stay in Svaneti on our Georgia & The High Caucasus private journey, featuring a visit to the village of Ushguli.  Prices for this 10 days / 9 nights tour including private transport and English-speaking guides start from £2345 per person, based on two people travelling. Read all the details here.

Additional images courtesy of Kathmandu & Beyond.