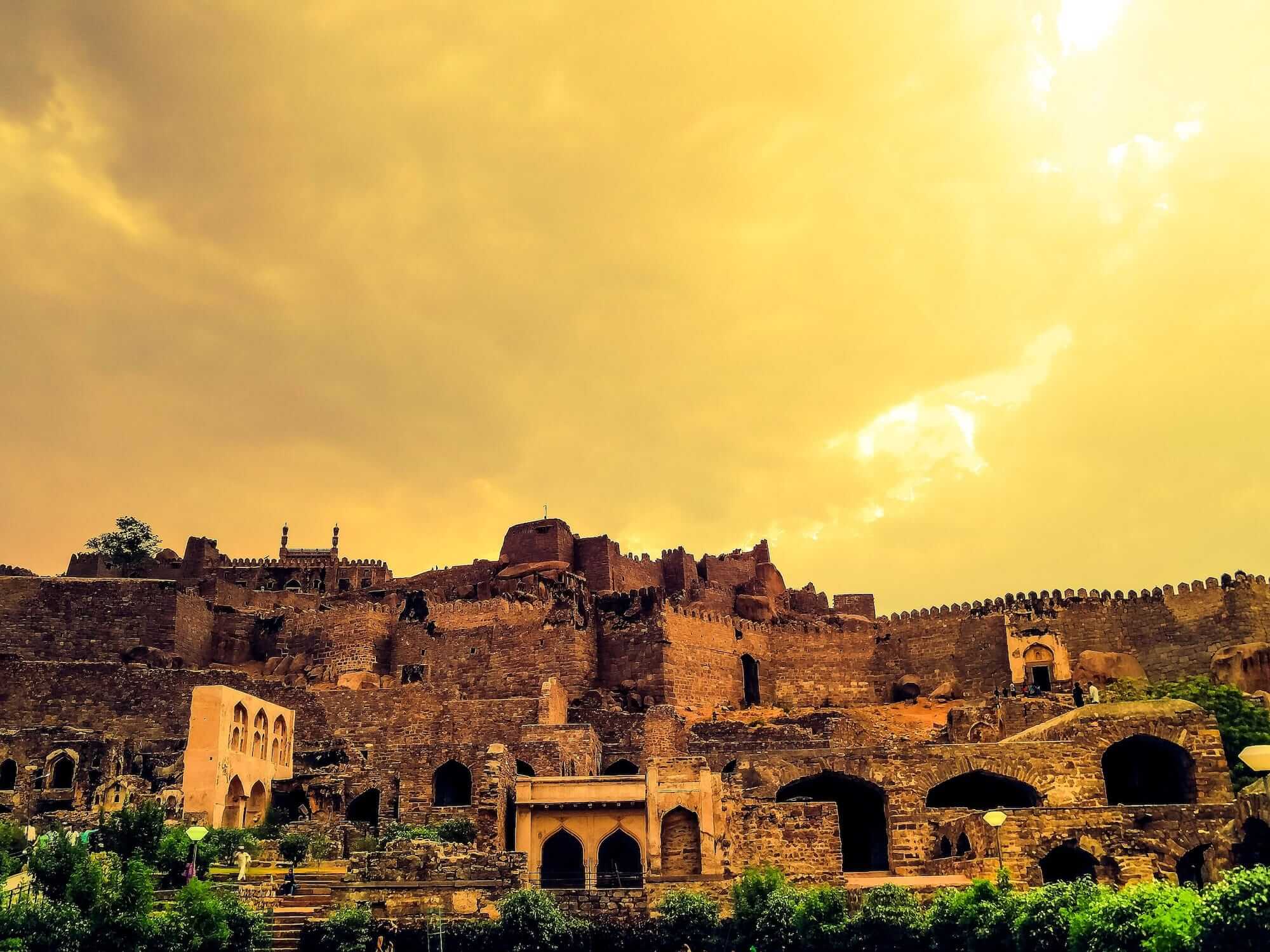 Hyderabad, at one time one of India’s largest princely states, is a historic city of forts and palaces. In the 18th and 19th centuries, the city flourished under its Nizam rulers and Hyderabad developed as a cultural, artistic and scholarly centre; a rich artistic heritage that makes Hyderabad the city it is today.

Hyderabad is also a city of bangles and biriyani, interweaving vivid colour and spicy cuisine to the already rich tapestry of the city. Despite this, Hyderabad doesn’t get many tourists; although considering the wealth of culture, delicious food, luxury hotels and the mix of colonial and Islamic architecture it has on offer, it’s a mystery why not.

Hyderabad’s most recognisable landmark is the Charminar, a 16th-century monument and mosque. Translated literally as ‘Four Minarets’, the Charminar is the gateway to the vibrant Old City. Before exploring its chaotic and lively alleyways, the climb to the top of the turret is worth it for panoramic views of the streets below.

The streets of bustling Laad Bazaar are lined with shops selling pearls, jewellery, clothing, shoes, bangles, as well as more mundane everyday goods. As in many parts of Asia, instead of having one street with a variety of vendors offering their wares, here you find entire streets dedicated to selling the same item. It’s a hard concept to understand as although it’s great for the consumer to be able to easily shop around, you would have thought shopkeepers could attract more customers if they avoided setting up shop next to many others selling the same thing.

Of all the streets, ‘Bangle Street’ is definitely the prettiest one in Hyderabad: here you will find shop after shop selling brightly coloured sparkling bangles, varying in price from around 30 pence for an entire armful of the cheapest ones to hundreds of pounds for one genuine gem-encrusted one. This part of the city is predominantly Muslim and the streets are usually packed with burka-clad women excitedly making their purchases. Moving through the crowded streets, many of them jangle with hidden jewellery.

Another must-see in Hyderabad is Golconda Fortress, built on a hill overlooking the city. Although Hyderabad is often called the ‘City of Pearls’, Golconda was at one time, the centre of the world’s diamond trade. The impressive fortified citadel is spread over a large area and it’s well worth a couple of hours of exploration. But make sure you leave time to visit the nearby Qutub Shahi tombs which are considered the oldest historical monuments in Hyderabad. Built combining Hindu and Persian architectural styles, with a little imagination their pale granite onion domes may remind you of mini Taj Mahals.

If you like your historical encounters to extend to where you lay your head at night, you won’t want to miss the opportunity to stay at the award-winning Taj Falaknuma Palace – it was once the luxurious residence of the Nizam of Hyderabad and is frequently voted as one of the best hotels in India.

And as for the biriyani … no visit to Hyderabad is complete without sampling the unique and delicious mixture of moist rice, tender meat and spicy sauce that made the city famous – its biriyani.

Visit Hyderabad on a tailor-made holiday to India – contact us at Corinthian Travel for further recommendations. Suggestions for a private journey include Hampi & The Deccan Sultanates and our Grand Tour Of South India.

We are very excited to introduce a new customisable itinerary featuring Hyderabad: This tailor-made journey will appeal to travellers seeking to combine southern India’s finest places to stay with a journey of discovery through the region’s rich cultural heritage and stunningly beautiful scenery. Travelling in comfort, this eclectic itinerary will introduce you to some of southern India’s myriad highlights from Hyderabad’s Golconda Fortress to Qutb Shahi tombs to Hampi’s spectacular ruins and Kerala’s scenic backwaters.

One thought on “Forts & Palaces, Bangles & Biryani: Heritage and Luxury in Hyderabad”