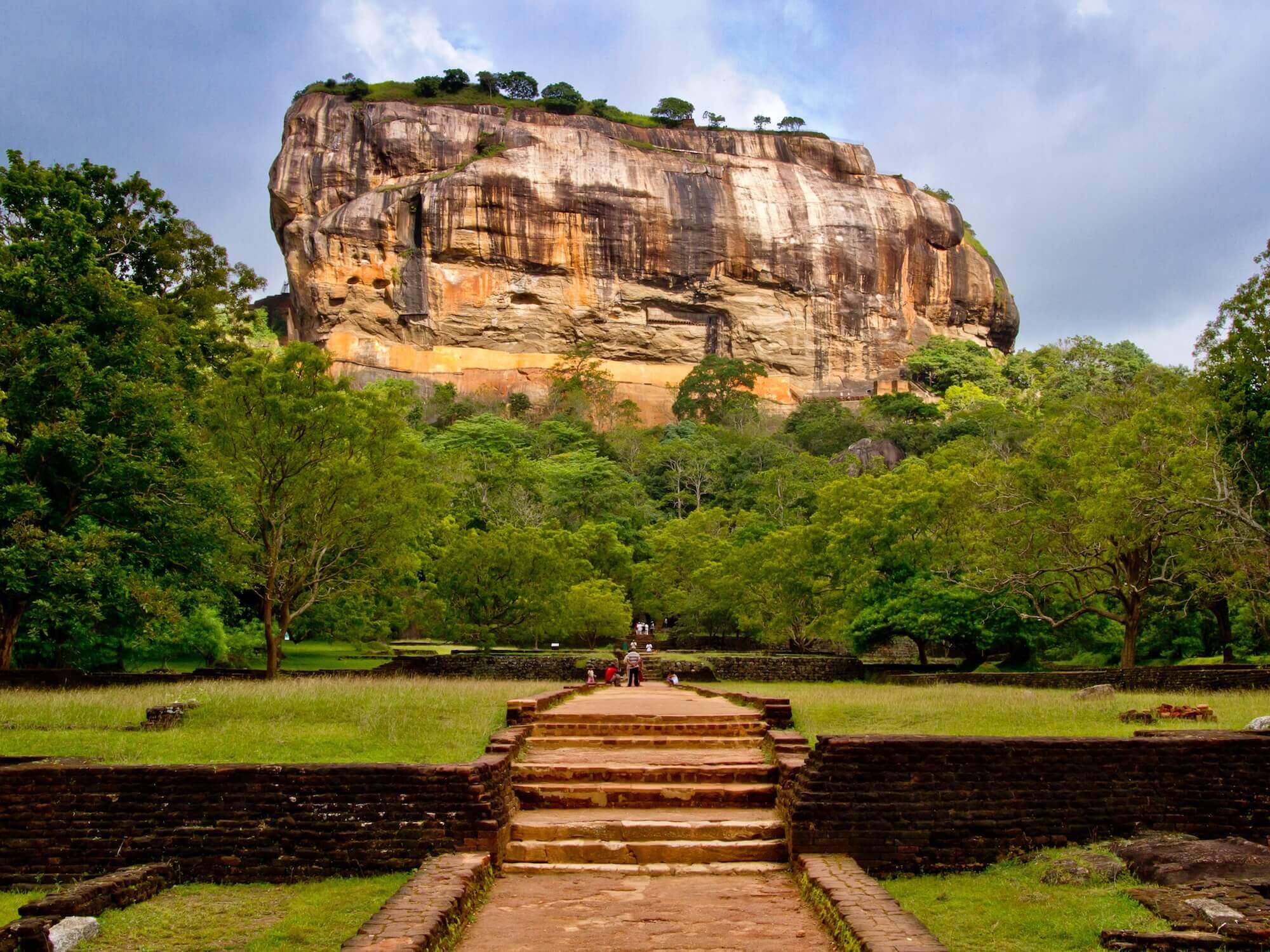 Are you visiting Sri Lanka? Do you love the outdoors and cultural discovery? If so, Sigirya Rock needs to be at the top of your itinerary. The rock is a classic tourist attraction that is visited and climbed by thousands of people every year as part of a visit to the Cultural Triangle, and for good reason. If you think you want in on the action, here is everything you need to know before climbing Sigirya Rock.

This ancient rock fortress is located in the Matale District in the central province of Sri Lanka, near the town of Dambulla. It’s said to have been built more than 1600 years ago by King Kasyapa. Legend has it that the king chose this site to build his new capital and used the 200-metre high rock as the base for his palace. About halfway up the rock, he built a gateway shaped like a lion and retreated there for quite some time as he was scared of attacks from enemies, namely, his own brother. Aside from the gate, the king had also built an array of defensive structures, gardens and palaces. Eventually, his brother found his palace and waged a war. Kasyapa’s army abandoned him and the king eventually committed suicide using his own sword. After the king’s death, the palace was abandoned and used as a Buddhist monastery up until the 14th century. There is an abundance of stories that all have different details when it comes to the king and the palace, however, this one seems to be most prevalent.

Evidence also shows that the rock was used as a shelter ever since prehistoric times. Cave dwelling can be seen all around the site that are thought to have been utilized during the Mesolithic Period and the 3rd Century BC.

Part of what has made the rock so popular is all of its significant and historical features. You won’t just be taking a hike to the top of a rock but actually taking a journey into the past. Some of the top things to see are:

The Frescoes: At one time, most of the western facing part of the rock was covered in paintings. While most of them have disappeared over the years due to weather, there are some that can still be seen. The paintings have been classified as being done in the Anuradhapura style although most of them are quite unique. Most of the paintings depict women although researchers haven’t been able to actually identify them. Guesses have been made that they were the king’s ladies or that they depict women conducting religious services.

The Mirror Wall: This wall used to be so well polished that it was said that the king could see himself in it. Now, the wall depicts the scribbling of visitors as far back as the 8th century. Many of the writings feature poetry or sayings about love, irony and peoples’ experiences.

The Water Gardens: These gardens are found in the central, west of the area and consist of three main gardens. The first water garden is built in the ancient Char Bagh style and is one of the last known models of this on the planet. The second consists of two deep pools that are fed by streams and are home to fountains. The fountains are unique as they are fed by an underground water system and actually are still functioning. This water garden also features two islands on which summer palaces were built. The third garden is at a higher elevation than the last two and is surrounded by the brick wall of the citadel and features an octagonal pool.

The Boulder Gardens: This garden is full of large boulders that are connected by winding paths. They can be found at the foot of Sigirya Rock and all show evidence of having a pavilion on them. It is said that they were used to push off the rock and onto enemies down below.

The Terraced Gardens: These gardens are at the foot of Sigirya Rock, carved out of the natural hill. The terraces can be seen from the boulder garden pathways to the rock staircases and were built by the construction of brick walls. The highest terrace is also the location of the lion gateway.

The Sigiriya Museum: This is where you can really dig deep into the history of the area. The museum shows off a photography collection of the site’s excavation as well as reproductions of the frescoes, translations from the graffiti on the mirror wall and various artefacts that were excavated. The entrance to the museum is included in the ticket and could be a good way to start your visit so you will know what you’re looking at.

Climbing to the different areas of the rock is part of the fun before actually reaching the top. Take your time and explore all areas instead of rushing right up. If you want to get to know the area, here is how you should climb Sigirya Rock.

Climb to Boulder Gardens: After getting in a good look at the Fountain Gardens below, there are some easy stairs to take up to the boulder gardens. On this level, you can see caves that were once painted and that once held pavilions. It takes about 5-10 minutes to climb this part, the space available for the climb is wide and the difficulty level is easy.

Climb to Terraced Gardens: Taking a few little stairways leading up to the boulder garden, you will walk towards the terraced gardens. Along the path, you can see quite a few caves and resting areas for observing the surroundings. Climbing time here takes about 15 to 20 minutes, the walking space is wide and the difficulty is moderate.

Climb to The Mirror Wall: Walk up a series of steep stairs that wind through different terraces and lead to a winding staircase. Take the staircase up to the mirror wall, an experience heightened by the view. Climbing time takes about 15 to 25 minutes, the climbing space is wide and the difficulty is very hard.

Climb to Sigiriya Frescoes: 20 meters above, you will need to take a small and spiral staircase to get to the frescoes. This is where you can see some pictures of the mysterious painted ladies depicted on the walls. The climbing time here takes 3 to 5 minutes, the climbing space is narrow and the difficulty is hard.

Climb to Lion Staircase: From the mirror wall to the lion staircase is quite a difficult climb. The stairs are made of marble and although wide, are actually very steep. This is a great place to stop and look down at the colourful gardens while taking a breather from the climb. Climbing time here takes about 15 to 25 minutes, the space is wide and the difficultly is hard.

Climb to Sky Palace: Sky Palace lies on the exposed side of the rock and is reached by a very steep and strenuous stairwell. The grooves that were carved into the rock for the original staircase can still be seen as you climb up. Climbing time here is 15 to 25 minutes, the climbing space is narrow and the difficulty level is very hard.

Climbing Around The Summit: This is the very top of Sigirya Rock and a true place to celebrate. Take some time to look around and admire the view while you rest. The climbing time here is 30 to 60 minutes, the climbing space wide and the difficulty level moderate.

The sun will be hot and you will be doing a lot of work during your visit. It is suggested to wear loose, cotton clothing, a wide-brimmed hat, sunglasses and closed footwear. If you prefer to wear sandals, it is recommended that you wear ones that are fastened to the feet.

While the climbing covers most of the worry, there are a few other things to keep in mind in order to keep safe. Dehydration is a possibility so make sure to bring plenty of water. The only place to get some is by the main entrance so once you head up the rock, you won’t be able to replenish. Visitors to the rock have consistently complained of hornets, especially around the lion gate so try to pay attention and avoid them if possible. Wild elephants roam the surrounding area at dusk and while this is not usually a problem, there have been some incidents over the years. Just make sure to be on your way home during this time. Crocodiles also roam around the lakes, moats and watering holes. Seeing one is highly unlikely but do be careful just in case.

The most desired time to visit the rock is from January to March, with February being one of the best months. The weather is a bit cooler although there are infrequent rain showers during this season. The best time to climb is either early in the morning or late afternoon when the weather isn’t so hot. In general, the temperature can get up to 32 degrees Celsius and the UV index to 11.

While you can explore the rock perfectly well on your own, having a guide might be nice for some added information. The guides are local and can save you a whole lot of time and hassle getting around since they know the area so well. The guides can be persistent in getting you to book with them so make sure to be stern if you don’t want a tour. If you do, make sure to negotiate a time and price before you start. Between $15 and $25 dollars is a good amount for a 3-4 hour tour.

How to Get There

Dambulla city is a great base to see the rock from. The bus connects the two and runs between 6:30 am and 6:00 pm, every 30 minutes. If you need to reach Dambulla, it is easily connected to other cities like Jaffna, Kandy and Trincomalee. You can also take a tuk-tuk from Dambulla to the rock but it will cost more money than a bus ticket.

The ticket office only accepts cash and charges 4,200 LKR per ticket which is a bit pricey and not suggested for budget travellers. In fact, you can actually walk around the ruins and the general area without purchasing a ticket if you are travelling on a budget.

There are a number of different restaurants located around the guesthouses by lion gate. Try Ahinsa Hotel for food and some mingling with other travellers, Chooty Hotel restaurant or NewSigirya café. All of these restaurants have good food in both western and Sri Lankan styles and are all relatively cheap. It is a little more difficult to get beer around this area but a short tuk-tuk ride could take you into the next town for a beer shop run. Most hotels will let you keep them in the fridge if you decide to bring some back.

There are quite a few guesthouse options right around the site. While these are more convenient, the prices are often inflated, making them a poor choice for budget travellers. Have a look at the route between Sigirya Rock and the city of Dambulla for more options. Some good options for guesthouses include the Flower Inn, which is family-run, offers meals and is a great place to meet other travellers. There is also the Nilmini Lodge which is within walking distance to the lion gate, grocery stores and a café. Try the Sigirya Paradise Inn Guest House for something a little newer, the Lion Lodge for the friendly owner, the Elephant Corridor Hotel for a luxury stay or Lal Homestay for a unique and local stay.

Visiting the Sigirya Rock is one of the highlights of a trip to Sri Lanka and is highly recommended for all travellers, at least for a day! Get in touch and start planning your visit today.