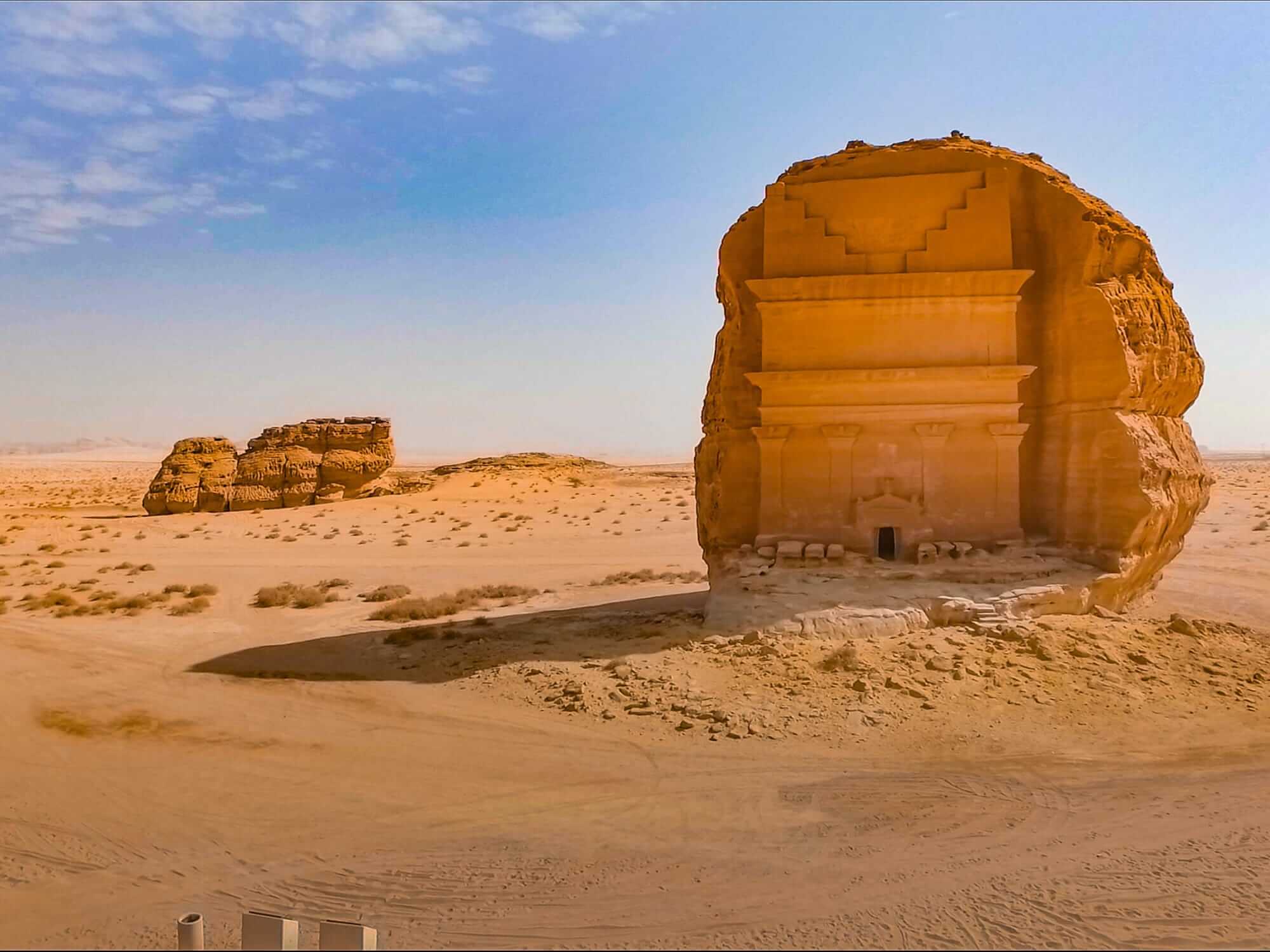 For many years, arranging a holiday to the Kingdom of Saudi Arabia was something of a challenge.

However now visiting Saudi Arabia is a real possibility and, current restrictions aside, it’s now far more straightforward to plan and book a tailor-made tour of Saudi Arabia.

But, which of the many fascinating places should you include on your Saudi Arabia tour? Here is our pick of the best places to visit in Saudi Arabia.

For some of Saudi Arabia’s most spectacular scenery head to Al Ula in the Kingdom’s northwest province of Medina. Here you will find a land of dramatic landscapes; a vast desert oasis filled with ancient rock formations, subtropical palm groves, rolling sand dunes, and cities lost and rediscovered.

Among Al Ula’s swathes of palm trees and red rock canyons is the fabulously shaped Elephant Rock. Also known as Jabal Al-Fil, this vast sandstone monolith resembles an elephant with its trunk firmly rooted in the desert.

In addition to being a place of great natural beauty, Al Ula is home to one of the country’s most impressive heritage sites, the ancient city of Hegra. Also known as Al-Hijr, or by its modern name Madain Saleh, the city was built by the Nabataean Arabs before being lost in time for 2,000 years. Sometimes referred to as the second Petra due to similarities with its sister site in Jordan, Madain Saleh was the first of Saudi Arabia’s five World Heritage Sites to be listed by UNESCO.

Some of the kingdom’s most diverse landscapes including the jaw-dropping Wadi Al Disah are found in Tabuk province in northwest Saudi Arabia. Translating as Valley of the Palm Trees, Al Disah is just one of Saudi’s great natural wonders. Wadi Al Disah is located within Prince Mohammad Bin Salman Nature Reserve; one of the Kingdom’s six royal reserves established in 2018 to preserve Saudi Arabia’s natural habitat and encourage conservation and preservation of its flora and fauna.

The valley is flanked with towers of red rock that rise from the fertile green carpet of lush palm trees and reflect in the valley’s still pools. The landscape is dramatic at any time of the day, but particularly so during the golden hour when the sun sets with magical effect.

Both figuratively and literally miles away from big-city life, Al Disah is suited for long hikes or off-road 4-wheel drive adventures, picnic lunches and barbecue dinners, and camping out in style under a canopy of a million stars.

Crystal clear turquoise waters and porcelain white sandy beaches are not the first things that come to mind when thinking about a tour of Saudi Arabia, and many travellers are surprised to learn that the Kingdom has over one thousand miles of unspoilt Red Sea coastline. The small town of Umluj on the shores of the Red Sea is the starting point for exploring the regions subtropical islands and beaches.

The area has become known as the Saudi Maldives and the Umluj archipelago consists of over one hundred pristine islands and is one of the most beautiful places to visit in Saudi Arabia. The Umluj islands are home to an abundance of sea life and stunning coral reefs, making the Saudi Maldives a superb place for snorkelling and diving in a very under-developed part of the Red Sea. Here you can find more than 1,200 species of fish, green and Hawksbill turtles, dolphins, dugong sea cows and up to 300 varieties of coral.

Water-based activities include fishing or dolphin-spotting, but an undisputed highlight of a holiday to Umluj is a private trip in a shaded fishing boat that allows plenty of time to swim and snorkel in the crystal-clear waters of Umluj. The Maldives of Saudi Arabia is the very definition of mesmerising natural beauty and one of the most unexpected sights in the Kingdom.

Al Qassim province in central Saudi Arabia is one of the country’s most traditional regions and the provincial capital, Buraidah, is host to one of the Kingdom’s most authentic markets. Held on most days of the weeks, a visit to the Buraidah camel auction provides a culturally immersive experience and the opportunity to observe one aspect of everyday life in Saudi Arabia.

The incredible Buraidah camel auction is the largest in the world and the vibrant market operates daily except for Friday. Early morning is when the market is at its liveliest and Saturday is the busiest day when over 2,000 camels are traded. If you are in the market for buying a camel, you can browse and bid in three sections: meat, milk and beauty (yes, a camel is judged by its good looks). Make sure you take your chequebook though; at special auctions, a thoroughbred camel can be sold for as much as an eye-watering one million dollars!

Volcanoes are not a geological phenomenon that many people associate with Saudi Arabia, perhaps because the last eruption in the country was 865 years ago. However, the lunar landscape of Harrat Khaybar is where you will find one of Saudi Arabia’s largest volcanic fields. Volcanic craters and 4,500 thousand-year-old lava flows cover an area of approximately 12,000 square kilometres and are a remarkable sight.

Mineral deposits have created so-called white volcanoes and the two largest, Jabal Abiyadh and Jabal Baydah, are a dramatic contrast to the nearby black cone of Jabal Qidr. The contrasting colours have produced intriguing two-toned lava flow patterns which can be seen while walking along some of the trails. Several of the paths lead up to crater ridges from where there are wonderful views across the lunar-like landscapes.

The Edge of the World

One of Saudi Arabia’s most dramatic landscapes, the Edge of the World (Jebel Fihrayn in Arabic) rises like a sheer cliff face from the ancient ocean bed seam 300 metres below. The uninterrupted views of the horizon give it its name and are truly awe-inspiring. The Edge of the World is part of the much longer Tuwaiq Escarpment that stretches for over 600 kilometres, from Buraydah to Rub Al Khali, the Empty Quarter, on the southern Arabian peninsula. It is a spectacular area for hiking, searching for fossils or simply enjoying the unforgettable sight of the setting sun from the cliff ridge.

The Edge of the World is less than 2 hours’ drive from Riyadh and an easy day trip by 4-wheel-drive from the Saudi capital. It is, undoubtedly, one of the natural wonders of the Arabian world and a must-see on your Saudi Arabia tour.

The historical neighbourhood of Jeddah, Al Balad is the original centre of the city and a dramatic contrast to modern Jeddah. Due to its strategic location on the eastern shore of the Red Sea, Old Jeddah was established in the 7th century AD as a major port. It was an important stop on Indian Ocean trade routes and was also the gateway to Mecca for Muslim pilgrims who arrived by sea.

Another of Saudi Arabia’s UNESCO sites Historic Jeddah, the Gate to Makkah was inscribed on the World Heritage List in 2014 with the aim of preserving the late 19th century houses. A highlight of any visit to Al Balad, the multi-storied houses are made with wood and coral limestone and shades of green, brown and white. According to UNESCO, they combine Red Sea coastal coral building traditions with influences and crafts from along the trade routes and were occupied by the city’s mercantile elites. Sunset and early evening are the best times for a wander around Al Balad when shops are open and the streets are at their liveliest.

Today Rijal Almaa is a heritage village on the UNESCO World Heritage Site tentative list. In history, Rijal Almaa was an important point on the route linking Yemen and the Levant to Mecca and Medina. The distinctive style of architecture is built from a combination of natural stone, wood and clay, with buildings five or more stories tall stacked up the hillside and window shutters painted in bright colours. Some of the houses served as fortresses and their interesting interiors reveal the rich heritage and culture of the region.

The area around Rijal Almaa heritage village boasts some of Saudi Arabia’s most spectacular scenery including Jabal Soudah, a 3,000-metre peak believed to be the highest in the Kingdom. The views from the mountain, of traditional villages dotted across carpets of greenery, are spectacular.

Rijal Almaa Village is also the site of the annual Flowerman Festival which sees hundreds gather, many in the traditional wear of the Qahtani tribe, to celebrate the region’s musical and dance heritage

Combining the best places to visit in Saudi Arabia introduces you to traditional villages and gleaming modern cities, lunar landscapes, tropical beaches, ancient history and intriguing culture. There’s no escaping the cliche, but the Kingdom of Saudi Arabia is possibly the most-diverse least-visited destination on the planet.

We have a comprehensive selection of flexible suggested itineraries for Saudi Arabia. Our destination experts, however, are passionate about travel to the Kingdom and would be delighted to discuss all of the options as well as the logistics of booking a private tour of Saudi Arabia. Contact us today.

If you enjoyed our suggestions of the best places to visit in Saudi Arabia, why not save it to your Pinterest travel planning boards?

One thought on “The Best Places to Visit in Saudi Arabia”